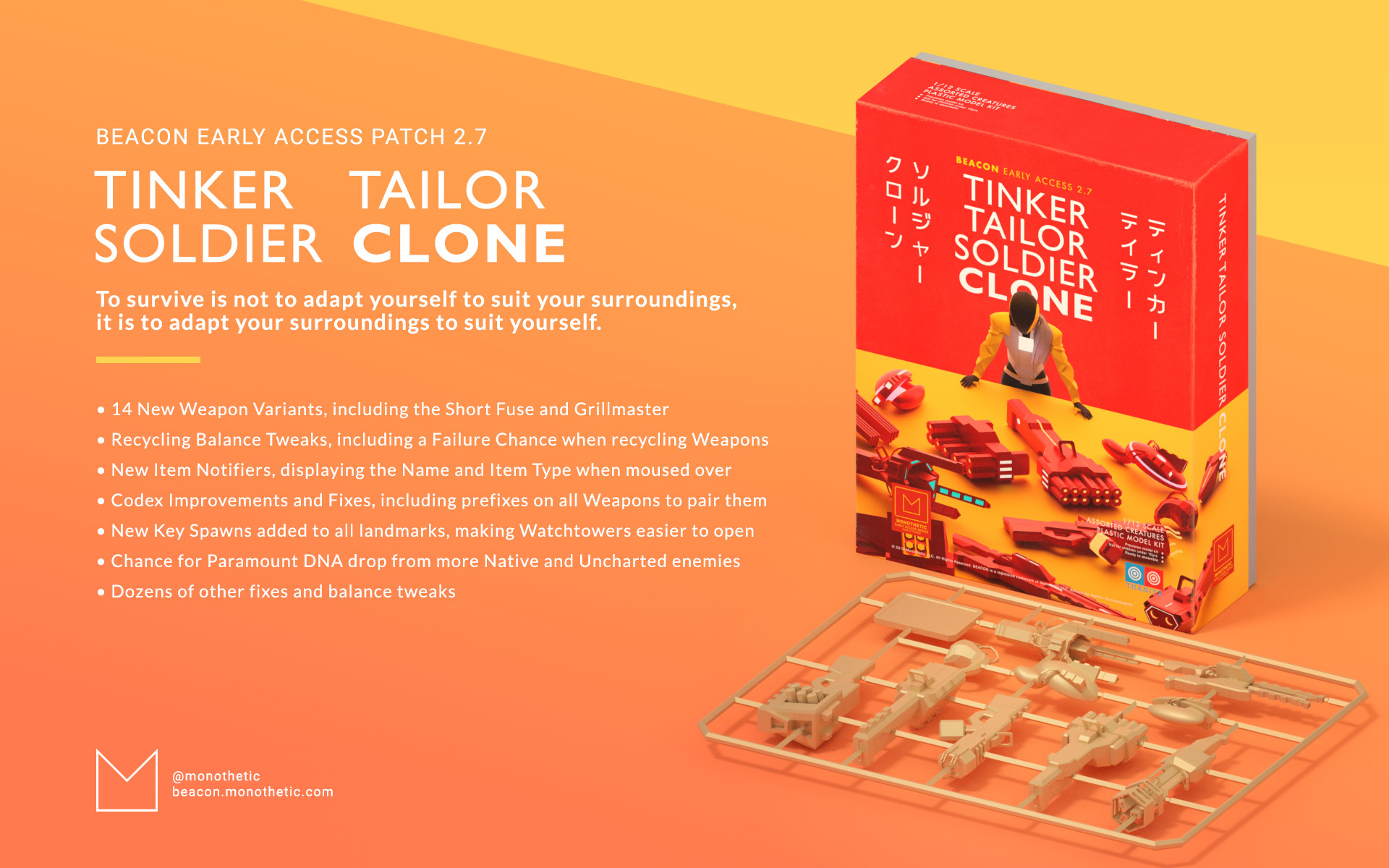 Beacon Patch 2.7 is here adding the final 14 Tinkered Weapons along with Item Notifiers, Recycling Balance, and many other fixes and balance tweaks!

In the new patch Recycling Weapons now has a failure chance, starting at 0% and increasing by 10% for every successful recycle. Recycling to get ammo mods has been one of the most fun additions to the game in a while, but in patch 2.6 too many ammo mods started to stack in longer runs throwing off the balance of later levels and making high fire rate weapons more powerful than intended. The longer your run goes now the more likely it is that your weapon recycles will fail, capping at an 80% failure chance making late game recycles more of a gamble.

Item Notifiers have been added to this patch as well, allowing you to mouse over all items to view their Name and Item Type. This was one of our most requested features recently, and should help players understand more easily what items spawn in caches and make it easier to decide which to pick up in the rare multi-loot caches without having to recognize the icons. 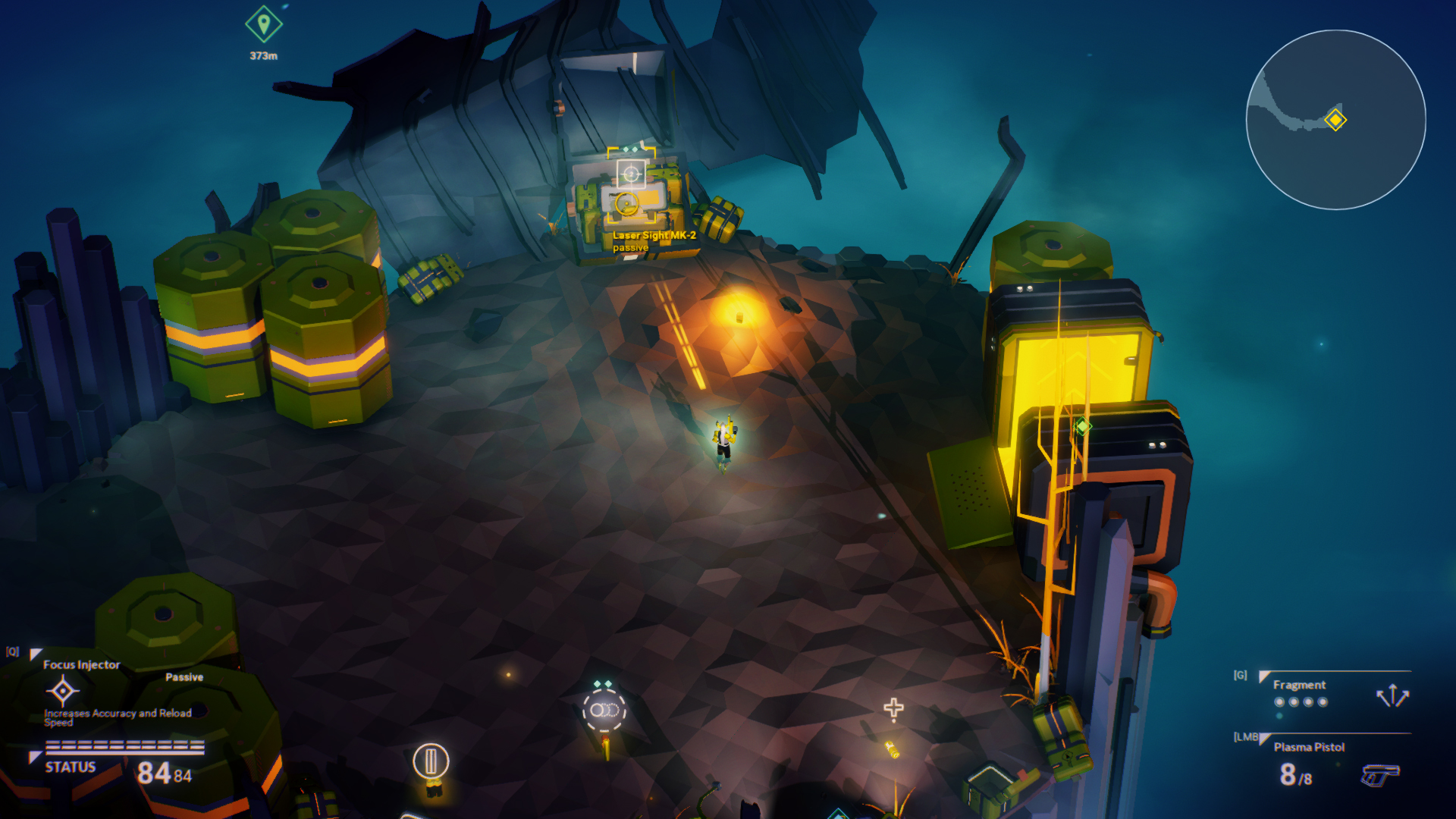 The final 14 Weapon Variants have been added as well, finishing the complete roster of weapons for the first release of the game with 114 total weapons. All weapons in the game have a Tinkered Variant now, and the Codex entries have been updated with prefixes to display weapons next to their tinkered versions.

Before going through the patch notes we want to update everyone on our new Patch schedule as well. Previously we were planning for patch 2.6 to be the final content patch with 3.0 following later this year, but following the burst of new players we have had recently from Itch.Io we want to add in a few more content patches to fill in the gap until the final release of the game. We don't plan for a ton of extra content to be added, but rather to split up some of the content that was being saved for 3.0 into smaller releases along with other fixes and balance tweaks based on incoming feedback.

A big part of our new release schedule is also moving up the release of Level 6 to the next content update, Patch 2.8. We want to get some feedback and testing on the final level before the full release, and it's been long enough now that the game kills you at the end of level 5 instead of having a proper ending. Patch 2.8 will only include 1 final boss and 1 ending, with the rest being added in patch 3.0 a few months later. Here's a peek at Level 6 which should release in August giving you the chance to fight the Prism Mainframe after descending a series of randomized catwalks. 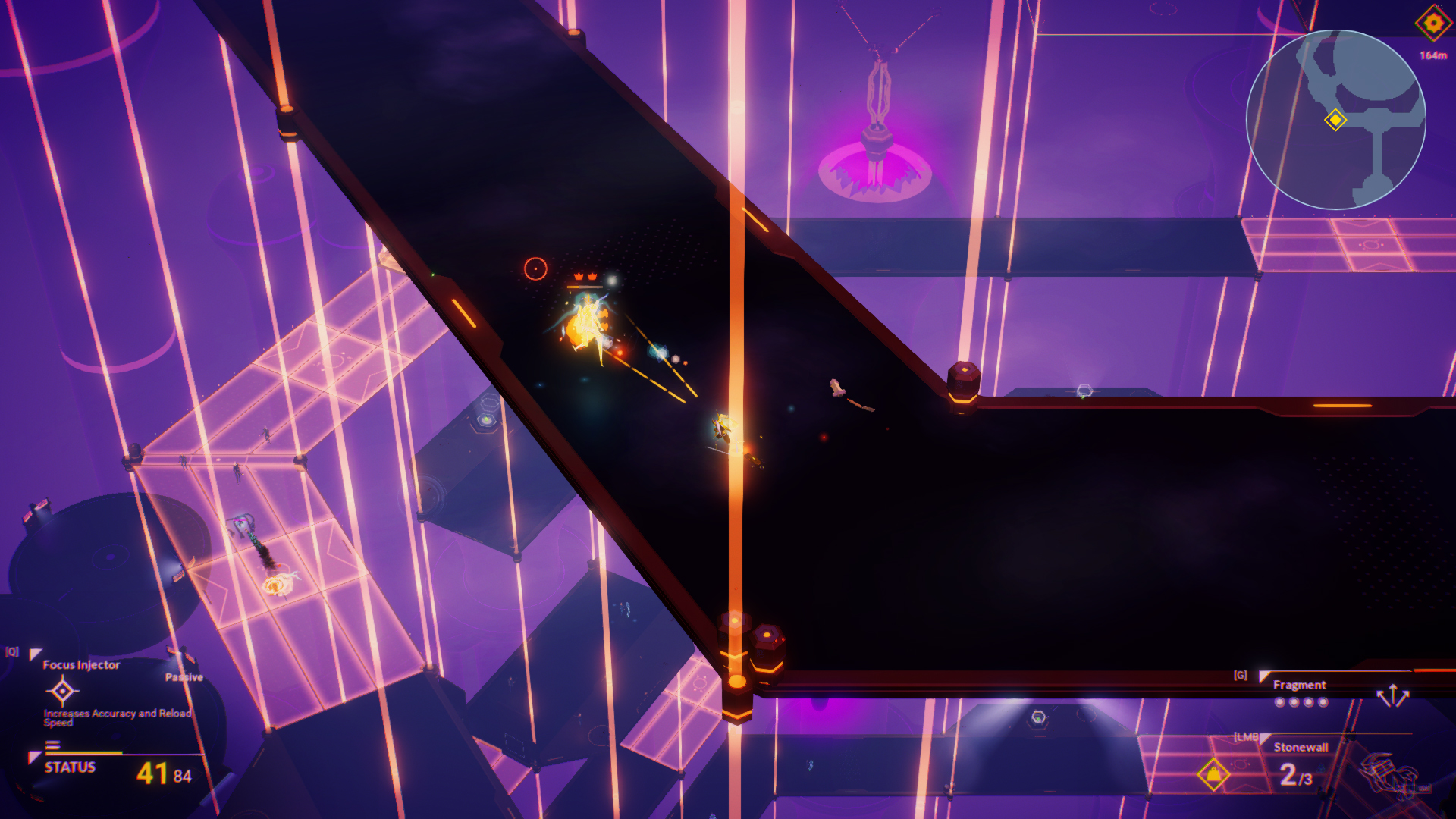 Note: We’re aware the Map keybind is currently broken, but the map can still be accessed through the Tab screen. The keybind should be fixed and released in a minor patch within a few days. 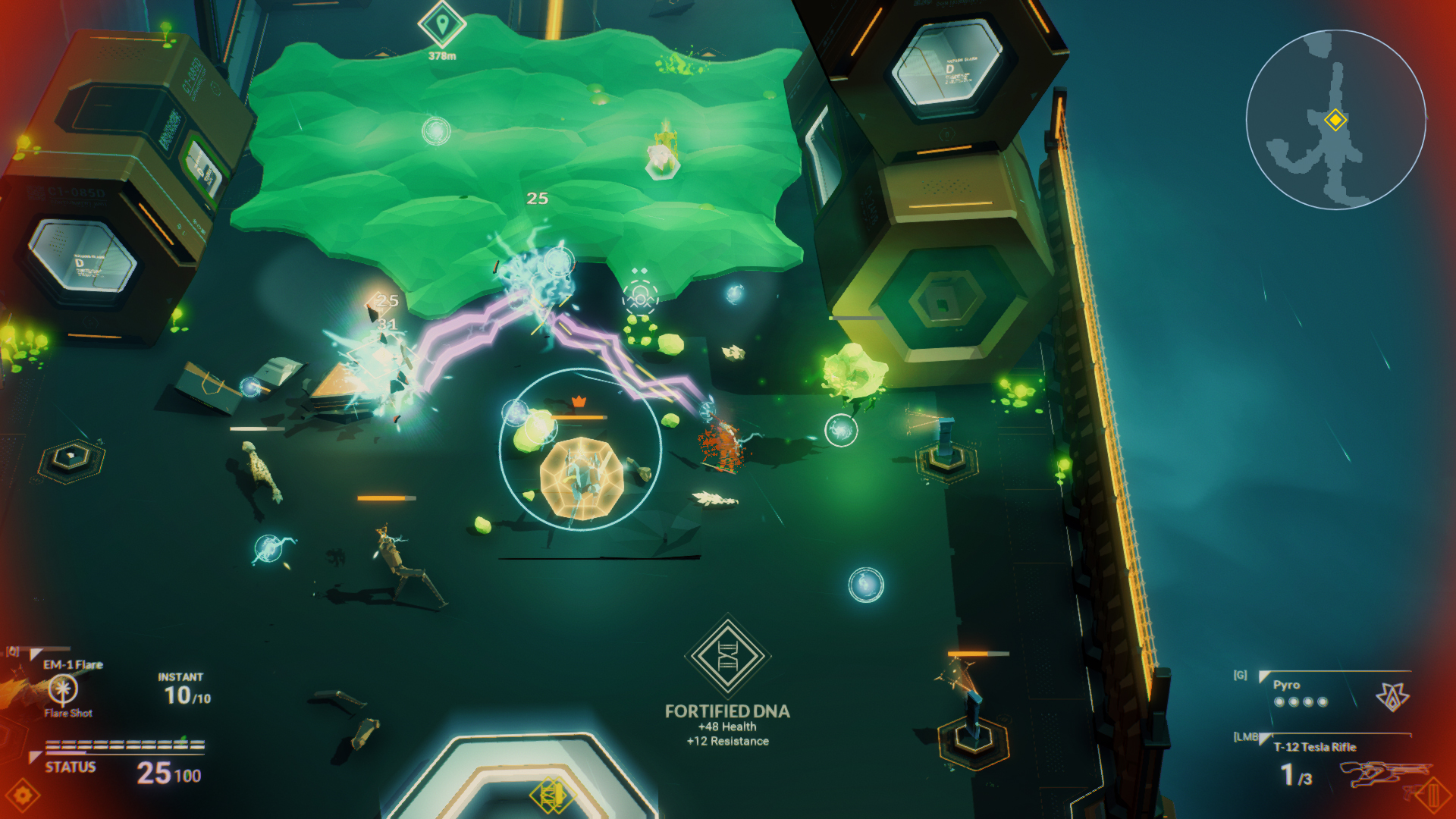 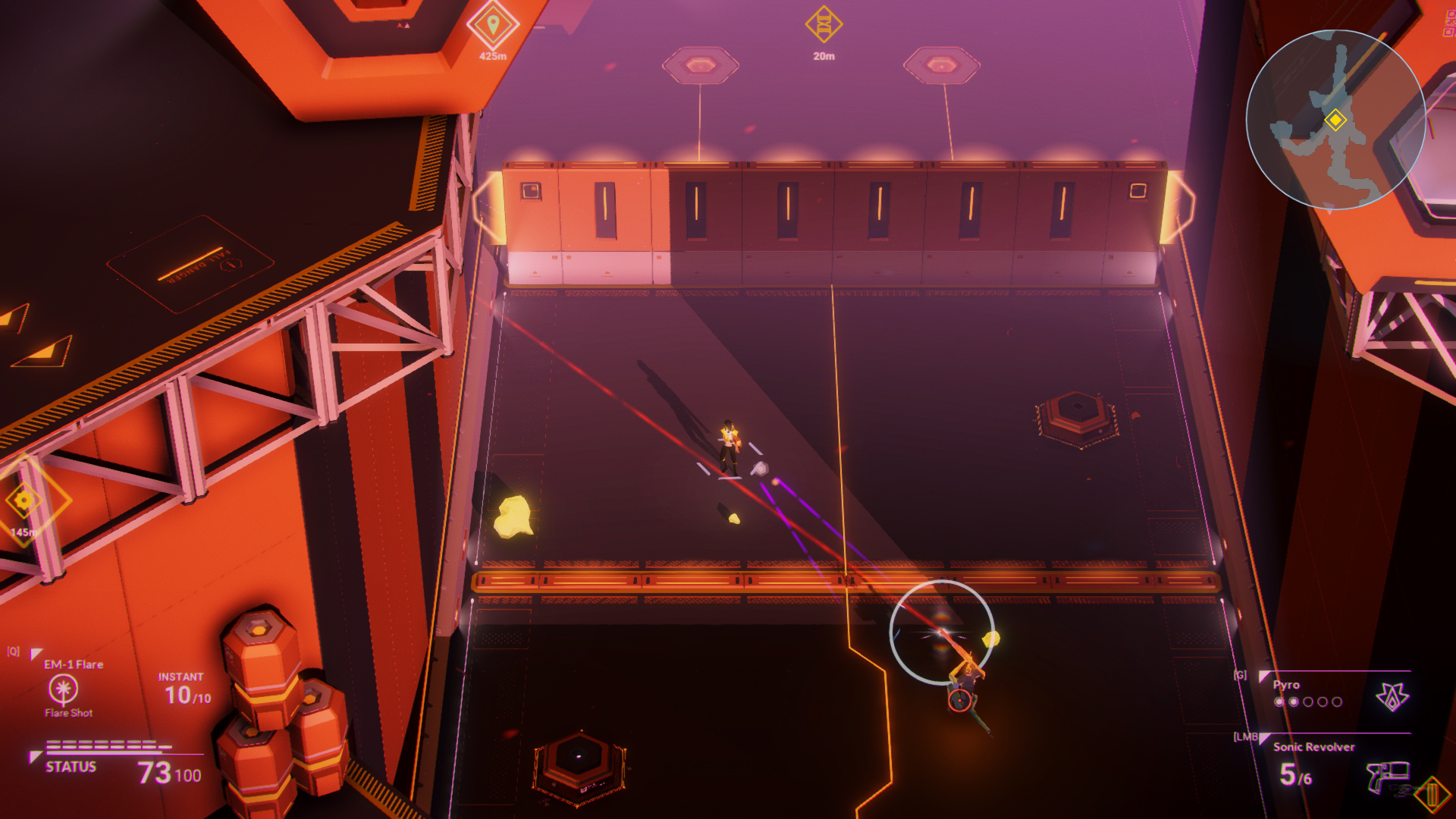